The S&P 500 inched up less than 0.1% after flipping between small gains and losses for much of the day. About 62% of companies in the index rose, with energy sector stocks notching the biggest gain as crude oil prices rose. Companies that rely on consumer spending also helped lift the market, outweighing declines in health care, communications and technology stocks.

Small-company stocks continued to outpace the rest of the market by a wide margin, a sign that investors are becoming more optimistic about an economic rebound. The Russell 2000 small-cap index climbed to a record high.

Banks and other financial companies added to recent gains as Treasury yields marched higher for the sixth-straight day after expectations that the economy will pull out of its slump after a powerful recovery sweeps the globe later this year. Bond yields can influence interest rates on mortgages and other consumer loans, boosting bank revenue.

“The odds of additional stimulus have gone up and we’re seeing some of the sectors that are likely beneficiaries being rewarded in terms of price movement,” said Sal Bruno, chief investment officer at IndexIQ.

Markets have been charging higher recently on a wave of optimism. The rollout of coronavirus vaccines has Wall Street anticipating a big rebound for the economy and corporate profits as daily life starts to return to normal later this year. Expectations are also rising for another round of stimulus coming for the economy because Democrats are set to soon have control of the White House, Senate and House.

But the gains have been so big that critics say stocks and other investments simply look too expensive.

Low interest rates and almost nonexistent inflation have been encouraging investors to keep piling into stocks, even though their prices are rising faster than their profits. But longer-term interest rates have begun to pull higher with expectations for more borrowing by the U.S. government, economic growth and possibly inflation in the future. The yield on the 10-year Treasury note briefly hit 1.18% Tuesday, before easing back to 1.14%. That’s up from 1.12% late Monday and from less than 0.90% at the start of the year.

And despite all the hopes for the future, the present remains bleak. The pandemic is accelerating around the world, particularly as new and potentially more contagious variants of the coronavirus spread. That forced U.S. employers to cut more jobs than they added in December, the first month that’s happened since the economy was collapsing during the spring.

On the losing end were several of those technology stocks that cruised as work-from-home and other trends beneficial to them boosted their profits. Microsoft slipped 1.2%, Facebook fell 2.2% and Google’s parent company dipped 1.1%.

Information for this article was contributed by Joe McDonald of The Associated Press. 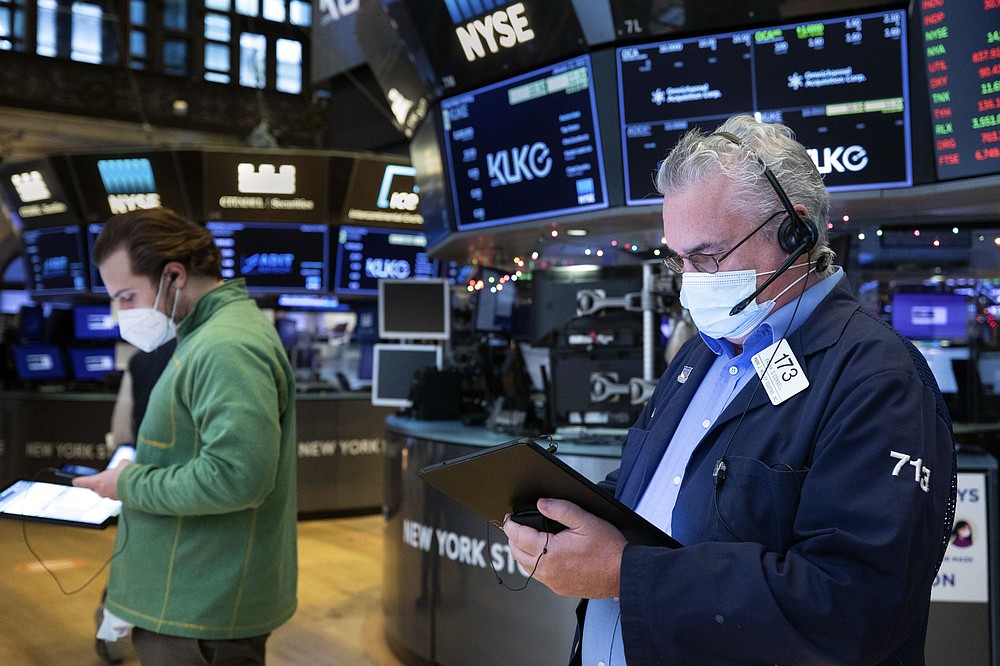 In this photo provided by the New York Stock Exchange, Frank O.Connell, right works with a feel trader on the floor, Tuesday, Jan. 12, 2021. U.S. stocks are drifting near their record heights Tuesday, while Treasury yields keep marching higher amid expectations that the economy will pull out of its slump after a powerful recovery sweeps the globe later this year. (Colin Ziemer/New York Stock Exchange via AP) 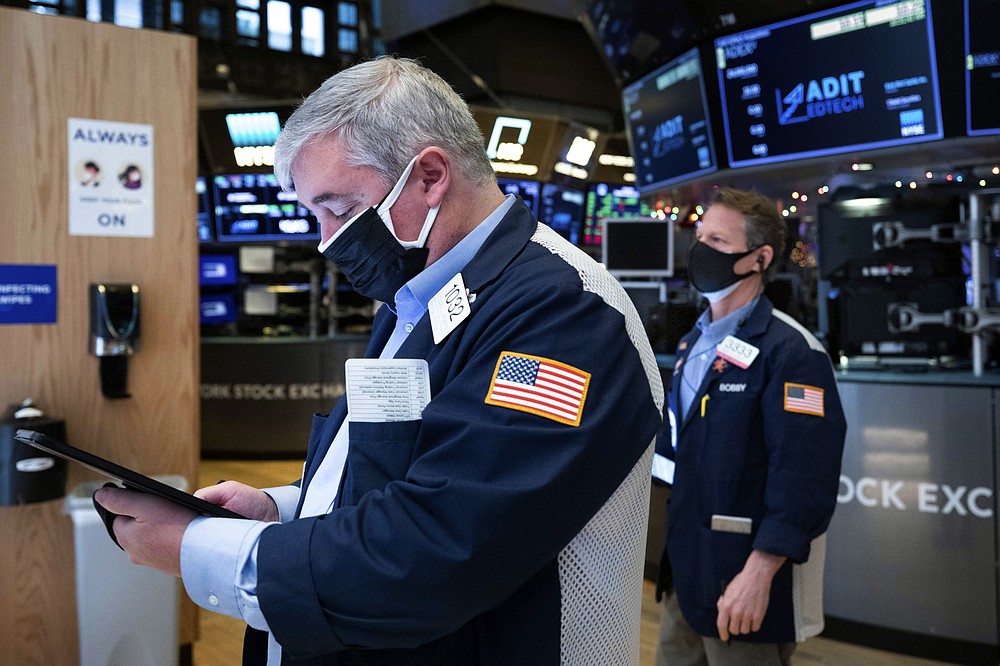 In this photo provided by the New York Stock Exchange, traders Edward MacCarthy, left, and Robert Charmak work on the trading floor, Tuesday, Jan. 12, 2021. U.S. stocks are drifting near their record heights Tuesday, while Treasury yields keep marching higher amid expectations that the economy will pull out of its slump after a powerful recovery sweeps the globe later this year. (Colin Ziemer/New York Stock Exchange via AP)

US stocks open mostly lower, heading for a weekly loss

US stocks tick up despite dismal jobs data on stimulus hopes

Such discouraging numbers could be fodder for critics of the stock market, who say prices have soared too high...

Royal Dutch Shell is set to cut 330 jobs from its operations in the North Sea. The company said...

By Herald on January 11, 2021.Lethbridge-East MLA Nathan Neudorf says there reason for optimism looking to the year ahead,...

Saudi-Russia Oil Price War — Paused, but Not Over – BRINK – News and Insights on Global Risk