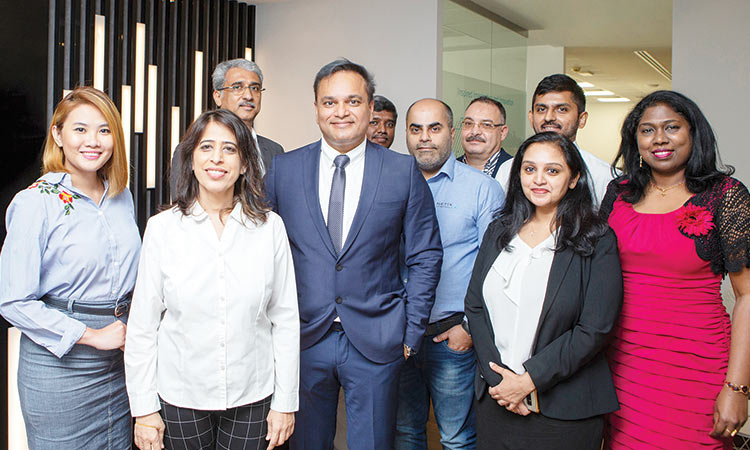 Top officials pose for a group photo during the event in Dubai.

The Saudi Arabia’s ‘Vision 2030’ will soon enter its sixth year. Looking back, the ambitious framework to diversify the economy into non-oil sectors, and develop public infrastructure, has been instrumental to the country’s continued influence across the region. Concurrently, on the domestic front, the nation has undergone structural reforms, leapfrogging towards a new socio-economic paradigm.

The pandemic and its cascading effect on the economy did slow down this progress. However, that short-term disruption pales in comparison to the long-term effect, which this pandemic has had on the key aspects of KSA’s evolution: technology adoption and sustainability. These central pillars of the Vision 2030, have now gathered steam in the post-COVID new normal. The emphasis is on the creation of smart cities, net-zero development and people-centric urban infrastructure. In other words, the pandemic has catalysed digital transformation, escalating existing trends that were already underway in Saudi Arabia.

“Supply-chain disruptions, shortages in essential supplies and unsustainable reliance on natural resources, which became pronounced during the pandemic, have led to a renewed focus on green initiatives and sustainability, going forward,” said Bhatia. “This new-found focus is in line with existing initiatives, such as ‘Riyadh Green’ and the Renewable Energy project. And with increasing technology adoption and a consequent rise in market-driven solutions, the KSA’s Vision 2030 could get a timely boost.”

Sustainability and green initiatives are indeed the focal points for KSA, which is one of the world’s largest producers of fossil fuel. Oil continues to contribute 30–40% to the GDP of Saudi Arabia, and this dependency did take its toll on the economy when oil prices witnessed dramatic slump during the peak lockdown phase. If KSA doesn’t expedite its transition into low-carbon energy and diversified economic sectors, it risks becoming redundant to the new, changing world order.

“Smart city technologies and connected building strategies are pivotal to strengthening KSA’s position in the region, and fostering positive outcomes in the social, economic and environmental aspects of sustainability,” Bhatia explained. “If the pandemic taught us anything, it is that we should tie up loose ends and embed future-readiness into the economy.”

The new normal is characterized by remote working, a health imperative, transparency and accessibility. These multi-fold criteria pose challenges in terms of affordability and scalability. Under such circumstances, smart city technologies are among the most viable solutions, which tick all the boxes. “Implementing IoT, AI, Machine Learning (ML) and Cloud-enabled models of smart infrastructure is no longer an option, but a reality that we should embrace sooner than later,” Bhatia continued. “Cities that implemented transparency gained from real-time data, actionable insights derived using AI analytics, and ML to continually refine processes, have shown resilience in the face of disruptions, while enabling optimization of resources and enhancing efficiencies.”

Bhatia’s sentiments are echoed in KSA’s billion-dollar smart city projects like Neom, which is dubbed as a “blueprint of sustainable life”. Saudi Aramco’s King Salman Energy Park (SPARK), too, is modelled on IoT-based integration – featuring an ecosystem consisting of an industrial area, port, and logistics zone, with residential and commercial facilities. Today, Saudi Arabia accounts for 15% of green building projects in the Arab world, including highest concentration of gold and platinum LEED-certified buildings. This attests to the appetite for smart and sustainable technologies in the Saudi economy, which could be a fertile ground for further advancement, as part of the Vision 2030 and post-pandemic economic revival.

“Funding and favourable policies are often the deterrents to widespread adoption of smart city technologies. This is where KSA has gained a competitive edge. This, in all likelihood, should continue well into the future,” said Bhatia. And, in what can be regarded as a validation of this opinion, a report by IDC Research estimated that Saudi Arabia’s spending on information and communications technology (ICT) surpassed $39 billion in 2019 — which is highest in the Middle East.

KSA’s continued belief in smart-cities investment is rationalized by the desirable civic outcomes unlocked over the years – including intra-generational mobility, economic growth and overall improvement in standard of living. Such value-driven, people-centric infrastructure has also been accompanied by more FDI, talent recruitment and ascent up the global value chain.

Russia is a country of superlatives. Its energy sector is one of the most important in the world where...

OPEC was formed in 1960 by founding members Iran, Iraq, Kuwait, Saudi Arabia, and Venezuela. For a brief period,...

Saudi Arabia recently unveiled a future beyond oil in the kingdom—a car and road-free city with zero carbon emissions....

CAPP forecasts oil and gas capex to increase 14%, but only 5% in Saskatchewan

Calgary– After one of the most brutal years for the Canadian oilpatch, the Canadian Association of Petroleum Producers (CAPP)...

Pakistan attempts to mend its relationship with Saudi Arabia