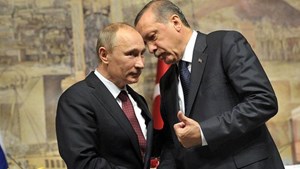 (Bloomberg) –Turkish President Recep Tayyip Erdogan was guest of honor at Azerbaijan’s military parade Thursday to mark its victory with Ankara’s help over Moscow ally Armenia. If Kremlin leader Vladimir Putin was angry at the incursion into his former Soviet backyard, he wasn’t showing it.

It was only the latest challenge from the Turkish leader that the normally assertive Putin has tolerated. That’s because, as Erdogan seeks to mend ties with incoming U.S. President Joe Biden’s administration, the Kremlin is confident Turkey will remain a thorn in the side of its fellow NATO members, fueling divisions that Moscow relishes.

U.S. plans approved by President Donald Trump, who’s boasted of his warm relations with Erdogan, to sanction Turkey over its purchase of a Russian S-400 missile-defense system will only further complicate the Turkish leader’s efforts to rebuild links with Washington.

From Azerbaijan to Syria to Libya, Erdogan’s drive to rebuild Turkey’s influence as a regional power has forced Russia to roll back its ambitions. Even as Erdogan increasingly positions himself as a check on the Kremlin’s geopolitical reach, Putin has nothing but warm words for his Black Sea neighbor in public.

“Relations are very tense right now, there’s competition and even an element of confrontation,” said Andrey Kortunov, head of the Kremlin-founded Russian International Affairs Council. “Still, cooperation with Turkey is so important strategically that Russia’s ready to close its eyes to this.”

The measured Russian response reflects the desire to nurture ties with Erdogan, who triggered an unprecedented rift within the North Atlantic Treaty Organization with the 2017 deal for the S-400 system.

Too many differences remain between Turkey and the U.S. and Europe to prevent friction, and Erdogan won’t stand for others trying to dictate how he behaves, a senior Russian government official told Bloomberg, asking not to be identified discussing policy issues.

Russia has experience of managing a volatile economic and political relationship with Turkey, even as Erdogan has sent Turkish forces and proxies to thwart Putin in regional hotspots.

Erdogan watched about 200 of his troops join Azerbaijani forces in the center of the capital, Baku, who paraded Turkish-made drones that were decisive in defeating Armenia during the 44-day war over the disputed region of Nagorno-Karabakh.

He’s effectively stymied a Russian-backed effort to wipe out the last rebel-held redoubt in Syria, said three people in Moscow familiar with the situation, after also confronting the Kremlin in Libya.

While Ankara has been telling Western partners that its growing footprint in the ex-Soviet arena and the Middle East is a bulwark against an expansionist Russia, that doesn’t mean Turkey’s on the same page with them, said Kortunov. “Under Biden, Erdogan’s problems are likely to mount,” he said.

Still, the strains between Moscow and Ankara are rekindling centuries of rivalry between the two former imperial powers. In 2015 Russia slapped crushing sanctions on Turkey after it shot down a Russian fighter jet on the border with Syria. On Wednesday, it barred imports of tomatoes from Azerbaijan, the country’s biggest export after oil and gas.

The Russian leader has championed a multi-polar world in which regional powers challenge Washington’s traditional leadership, but Erdogan is proving more than a match as they wrestle for influence. 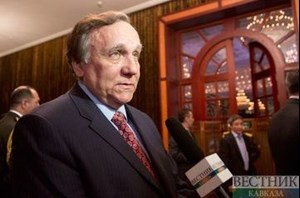 “We’re allies in some respects but in others our interests are diametrically opposed,” said Andrei Baklanov, a former Russian diplomat who’s served in posts including ambassador to Saudi Arabia and is now affiliated to the Valdai club in Moscow. “We have to learn to live with this situation.”

While Putin secured a cease-fire between Azerbaijan and Armenia that allowed him to send Russian peace-keepers to Nagorno-Karabakh, Erdogan’s assertiveness in supporting Baku during the war gained Turkey a role in overseeing the truce agreement.

In Syria, where Putin ally Bashar al-Assad wrested back control of most of the country thanks to Russian and Iranian support, Turkey has blocked government efforts to retake the key rebel bastion of Idlib. Russia, which sent mercenaries earlier this year to spearhead an assault on the city, has suspended the operation because of Turkish opposition, the three people familiar with the matter said.

In oil-rich Libya too, a Russian ally, eastern-based military chief Khalifa Haftar, is losing ground amid renewed efforts to negotiate a political settlement with the United Nations-backed government in Tripoli that enjoys Turkish backing.

Turkey is also a major energy customer for Russia, but even here it has proven problematic. Once Moscow’s top customer outside the former Soviet Union, Turkey has reduced gas purchases in recent years by turning to rival suppliers like Azerbaijan.

Putin in public praises Erdogan for his independence in doing energy and weapons deals with Russia despite opposition from its NATO allies. “It’s not just nice to work with that kind of partner, it’s reliable,” Putin said in October. As for differences between them, Russia needs to “be patient” and “seek compromise,” he said.

For the moment, Russia and Turkey are maintaining a fraught relationship “despite their mutual differences of opinion,” said Sinan Ulgen, executive chairman of Istanbul-based think-tank EDAM and a visiting scholar at Carnegie Europe in Brussels.

Erdogan is “constantly raising the stakes. He doesn’t listen to other countries,” said Irina Zvyagelskaya, a Middle East expert at Russia’s state-run Institute of World Economy and International Relations. “For Russia, Erdogan is not an easy partner, not an easy actor to deal with.”

Oil Price War Could Be on the Horizon  | Rigzone