The US has raised the pressure on Saudi Arabia to change course in its oil price war with Russia, calling on the kingdom to “rise to the occasion” and start working to stabilise global energy markets.

Mike Pompeo, the US secretary of state, made the remarks ahead of a meeting of G20 leaders on Thursday, marking Washington’s most direct appeal yet in a confrontation that has exacerbated a collapse in oil prices triggered by the global coronavirus pandemic.

A senior state department official last week said multiple oil companies and members of Congress had lobbied the Trump administration to intervene. The official said excess oil output only “exacerbates” existing challenges as authorities scramble to respond to the pandemic.

“The secretary stressed that, as a leader of the G20 and an important energy leader, Saudi Arabia has a real opportunity to rise to the occasion and reassure global energy and financial markets when the world faces serious economic uncertainty,” the state department said in a statement. 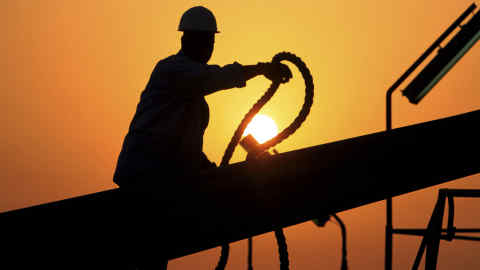 Saudi Arabia, one of Washington’s key allies in the Middle East and holder of the rotating head of the G20 this year, aims to flood the oil market at a time when demand is already cratering in an attempt to secure a bigger share of the market.

But the policy under Prince Mohammed has faced severe criticism in multiple capitals for the damage it has caused to oil producers globally, both in wealthy countries such as the US who are facing a credit crunch and rising job losses and in poorer oil-dependent countries such as Iraq, Oman and Nigeria.

The price war has helped to cut oil prices in half this month to near $25 a barrel, the lowest level in 17 years.

Saudi Arabia launched the offensive at the beginning of the month after Russia, its partner in the so-called Opec+ alliance, refused to join in making deeper cuts to crude production to support prices. In response, the kingdom has said it will open the taps to demonstrate its power in the market.

But the decision was made before it became clear how badly coronavirus would hit global demand, raising hopes Saudi Arabia can be convinced to alter its stance — even as it remains at odds with Russia over how to respond to the crisis.

One Saudi source familiar with the kingdom’s energy policy conceded the collapse in oil demand — now estimated at being between 10 per cent and 25 per cent of the 100m barrel a day global market — had far exceeded their projections in early March, before the start of widespread lockdowns and flight cancellations.

The optics of this will be important to them [the Saudis]. They don’t need to be the bad guys

The global oil industry is now facing the prospect of running out of storage in a matter of weeks as the most severe demand slump in history coincides with rising supplies.

Donald Trump at first welcomed the fall in oil prices, saying it was good for motorists. But the US president has since changed his stance as the drop started to hit energy-producing states such as Texas, North Dakota and gas-rich Pennsylvania.

A large number of US shale producers are facing bankruptcy and production is expected to fall sharply in the next 18 months if prices remain low, threatening Mr Trump’s goal of US energy independence and America’s place as the world’s top oil producer.

Poorer countries reliant on commodity revenues are also facing a drain on their treasuries right at a time they are scrambling for resources to tackle the pandemic.

Washington’s public pressure puts Saudi Arabia in a difficult position, facing a demand from its most important ally at a time it is eager to avoid losing face in its price war with Moscow.

Destabilising the world economy at a time when Riyadh holds the G20 presidency makes its position particularly uncomfortable, since most fellow G20 leaders are scrambling to prevent the coronavirus crisis from triggering a global depression.

The Saudis are due to host a virtual gathering of G20 leaders on Thursday to advance what it described as “a co-ordinated global response to the Covid-19 pandemic and its human and economic implications”.

The Financial Times is making key coronavirus coverage free to read to help everyone stay informed. Find the latest here.

Ali Shihabi, a Saudi commentator seen as close to the leadership, said the kingdom could choose to be more collaborative in the short-term.

“The optics of this will be important to them,” said one Opec official. “They don’t need to be the bad guys. [I’m] not sure how much more oil they can sell because of demand destruction anyway.”

But one adviser to Saudi Arabia said the kingdom would “stay the course” in the price war, believing it has little choice. Global oil demand is forecast to peak by many analysts in little more than a decade, meaning low-cost producers such as the kingdom have an incentive to beat out rivals to gain a bigger share of the remaining market.

It is not clear that reducing supplies would significantly alter the trajectory of oil prices in the short-run, traders and analysts have warned. Saudi Arabia’s promised increase in supplies is the equivalent of less than 3 per cent of the global market. The pandemic has triggered double-digit percentage drops in demand.

BloombergHow a Penny Stock Explodes From Obscurity to 451% Gains Via Chat Forums(Bloomberg) -- “You guys still awake?”It was...

Kuwait oil prices to reach around $60 pb in 2nd half: expert

KUWAIT: An oil expert yesterday anticipated Kuwait oil prices to increase to $60 per barrel (pb) in second half...

Oil price gains on stimulus optimism ahead of Biden inauguration

As soon as Goldman Sachs gets bullish on natural gas, new weather models are forecasting warmer weather trends for the next...

COLUMN-Oil prices likely to average less than $60 over next cycle: Kemp – Agricultural Commodities