R-0 may be the most important scientific term you’ve never heard of when it comes to stopping the coronavirus pandemic.

Harris wasn’t in contact with either staffer, but she is quarantining out of an abundance of caution, according to a campaign manager for presidential candidate Joe Biden.

Meanwhile, North Dakota, South Dakota and Montana are seeing cases surge at rates, per capita, higher than any state’s worst this spring or summer, while Wisconsin is not far behind.

New evidence has come out linking blood type to the likelihood of contracting the virus. And there are still three places in the country without any COVID cases.

📈 Today’s numbers: The U.S. has reported more than 7.9 million cases and 216,000 deaths, according to Johns Hopkins data. There have been more than 38.5 million confirmed cases around the world and 1 million deaths.

This file will be updated throughout the day. For updates in your inbox, subscribe to The Daily Briefing newsletter.

President Emmanuel Macron announced that 18 million French citizens in nine regions, including in Paris, will have a curfew starting Saturday through Dec. 1.

He also reinstated the state of health emergency for the country, which ended three months ago. The 9 p.m. curfew is aimed at limiting the resurgent coronavirus amid second wave.

“Our goal is to curb the virus,” Macron said. “We must reduce the number of cases per day to 3,000 or 4,000. Our goal is to reduce private contacts. What is called the curfew is a measure that is appropriate.”

A flight crew member, who doesn’t work for the campaign, and the senator’s communications director, Liz Allen, tested positive, according to Joe Biden campaign manager Jen O’Malley Dillon. Harris wasn’t in close contact with either person within two days of the tests and faces no obligation to quarantine, Dillon said.

“Regardless, out of an abundance of caution and in line with our campaign’s commitment to the highest levels of precaution, we are canceling Sen. Harris’s travel through Sunday, Oct. 18,” Dillon said.

The Atlanta Falcons announced Thursday that it is shutting down its practice facility because of a positive COVID-19 test. The team was set to play the Minnesota Vikings on Sunday.

“Out of an abundance of caution following one new positive test, we have made the decision to stop all in-person work at IBM Performance Field Thursday and will conduct all operations virtually,” the Falcons said in a statement.

The Tennessee Titans recently had an outbreak that led to a 17-day stoppage.

These three US counties have zero COVID-19 cases. How?

Nine months into a relentless pandemic, three counties – technically two and a borough – remain as the lone holdouts, fighting off the virus and reporting no cases of COVID-19 so far. They are Esmeralda County in Nevada, Loving County in Texas and Skagway in Alaska, which uses the term “boroughs’’ rather than “counties.’’

All three are remotely located and have fewer than 1,100 residents, undoubtedly key factors in allowing them to escape relatively unscathed. But it has come at a cost.

For instance, Skagway has seen its economy devastated by the cruise ship cancellations forced by the COVID-19 outbreaks. Not a single ship arrived at its port this year, causing 1,200 jobs created by an influx of tourists to vanish.

Your blood type may play a role in contracting COVID-19, studies find

Good news for people with O-type blood: Two studies published in the journal Blood Advances suggest that they may have a lower chance of contracting COVID-19 – and have less severe symptoms.

A study out of Denmark using health registry data from over 2 million people found that people with other blood types more frequently contracted COVID-19 than people with blood type O.

Meanwhile, a study from Canada found that those with blood types O and B who tested positive for COVID-19 fared better than those with A or AB blood types, who needed mechanical ventilation and dialysis at a higher rate.

A Sweet 16 celebration held at a Long Island venue on Sept. 25 became a super-spreader event after 29 guests contracted COVID-19. The number of cases connected to the party, held at the Miller Place Inn, eventually ballooned to 37 cases total, counting household and other close contacts.

More than 80 guests were in attendance, in effect breaking New York state rules that specify that indoor social gatherings must be capped at 50 people maximum.

The venue was charged $12,000 by Suffolk County Department of Health Services for violating this mandate, and for “operating a food establishment in an unsanitary condition,” per a release from the county.

Some states report biggest COVID-19 surges this year, even more than summer

The latest coronavirus surge has states reporting the coronavirus at a blistering pace, with North Dakota reporting cases at a speed a third faster, on a per-capita basis, than any U.S. state experienced in the worst of the spring or summer surges.

South Dakota and Montana are also ahead of the summer records while Wisconsin is not far below, a data visualization of Johns Hopkins University by University of Illinois computer scientist Wade Fagen-Ulmschneider shows.

This startling development comes as 14 states set records for new cases in a week, while four states had a record number of deaths in a week.

Surveys: Americans torn between taking a vacation and avoiding COVID-19

Two surveys released this week found that many travelers are expressing hesitation about taking a trip.

Some 67% of those responding to an AAA Travel survey released Thursday say they are uncertain about whether to take a vacation. And online travel booking site Travelocity found 57% of Americans say they won’t travel for the year-end holidays this year.

The findings are in line with advice from the Centers for Disease Control and Prevention, which offers a world map that indicates the coronavirus is a threat in just about every country, including the U.S.

Sharks are killed for effective vaccines. More may die for it.

Conservationist groups are concerned demand for a coronavirus vaccine will strain an already taxed resource: sharks.

Shark liver oil contains the natural occurring substance squalene. Scientists use squalene for adjuvants that are added to vaccines to enhance immune response and increase effectiveness.

In many shark species, 50% to 80% of the weight of their liver is squalene, according to Dr. Corey Casper, president and CEO of the Infectious Disease Research Institute. A single shark could yield up to 300 grams of squalene, enough for about 30,000 doses of vaccine adjuvant.

About 3 million sharks are harvested for their livers annually. In a worst-case scenario, Shark Allies estimates 500,000 more sharks will be needed to meet COVID-19 demand. Activists, such as Stefanie Brendl, founder of Shark Allies, are concerned that “more sustainable squalene sources are not being considered as an option.”

The idea that the public can infect its way out of the COVID-19 pandemic is “a dangerous fallacy unsupported by the scientific evidence,” 80 researchers said  in a letter published in the Lancet.

They strongly denounced the idea, advocated by the White House, of achieving “herd immunity” against the virus that causes the disease by letting healthy people with a low risk of serious illness get infected.

“The most compassionate approach that balances the risks and benefits of reaching herd immunity, is to allow those who are at minimal risk of death to live their lives normally to build up immunity to the virus through natural infection, while better protecting those who are at highest risk,” the declaration says.

A community is considered to have herd immunity when enough people have built up protection against a pathogen, either through natural infection or a vaccine. No one knows exactly how many people need to be protected to stop COVID-19 from spreading, but estimates range from 50-70% of the population. Current estimates put that percentage based on those who’ve been infected in the U.S. at about 10%. 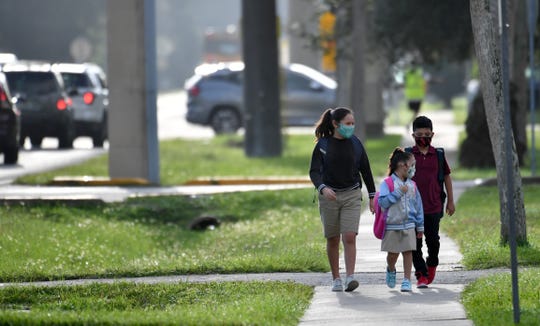 Parents in Florida have raised more than $11,000 to hire an attorney as the group’s organizers prepare to sue the Sarasota County School Board’s mask policy.

“We are taking action to have the mask mandate decision reversed immediately for the physical, emotional and social well-being of our children. The decisions made by the board are not in the best interest of the people they serve,” the petition accompanying the fundraiser states.

The petition sponsors did not respond to a request for further comment on Tuesday, and their legal strategy is not clear, although a post from an organizer said a lawsuit should be filed by Friday.

The School Board’s current policy generally requires all students and staff to wear masks throughout the school day, with a handful of exceptions. Students are not required to wear the face coverings while exercising or eating, and as long as they are socially distanced from their classmates, they may take brief mask breaks during class.

“It was two weeks ago when I received the diagnosis that so many Americans across our country and the world had already received – I tested positive for COVID-19,” the first lady said in a statement. “To make matters worse, my husband, and our nation’s Commander-in-Chief, received the same news.”

She continued: “Naturally my mind went immediately to our son. To our great relief he tested negative, but again, as so many parents have thought over the past several months, I couldn’t help but think “what about tomorrow or the next day?”

“My fear came true when he was tested again and it came up positive. Luckily he is a strong teenager and exhibited no symptoms. In one way I was glad the three of us went through this at the same time so we could take care of one another and spend time together. He has since tested negative.”

Stephanie Grisham, the first lady’s chief of staff and spokeswoman, told USA TODAY on Oct. 2 that Barron “has tested negative, and all precautions are being taken to ensure he’s kept safe and healthy.”

Community members gather for a photo after planting pinwheels at the Children’s Advocacy Project to raise awareness for “Child...

Fracking has been a hot topic during the 2020 presidential election. The Verify team is checking out claims about...

Trump vs. Biden: Quotes from the final presidential debate

By inserting novel genes into bacteria or yeast, scientists can make them produce a huge range of chemicals of...