BARCELONA (ICIS)–The pandemic has boosted
numbers of refinery-linked renewables projects
whilst causing delays and cancellations to
traditional petrochemicals projects, according
to an ICIS analyst.

With lockdowns causing a rapid collapse in
demand for transport fuels, oil refiners are
now questioning the need for investments in
mega petrochemical projects as recycling and
the sustainability agenda have continued to
accelerate during the pandemic.

Michael Connolly, senior consultant with the
ICIS global refining team said: “Decisions have
been fast-tracked by the pandemic. Where people
previously were unsure about these transitions,
the pandemic has shown how quickly demand can
be reduced.  This has been a catalyst for
people to make these decisions.”

He pointed out that there have been several
cancellations and delays to petrochemical
projects this year.

“Pressure on virgin petrochemicals from
recycling and the circular economy has created
concerns about some of these mega investments.
This is hindering some refiners from making
that final decision to transition from
traditional oil products to petrochemicals,” he
said.

Many oil refiners had been refocusing on
petrochemicals as a source of future growth as
they forecast declining demand for transport
fuels. Now, refiners have been spurred on to
the transition to renewables by the pandemic.

Since the pandemic there has been a spate of
announcements by refiners for projects linked
to renewables. These are often linked to the
closure of traditional refineries. 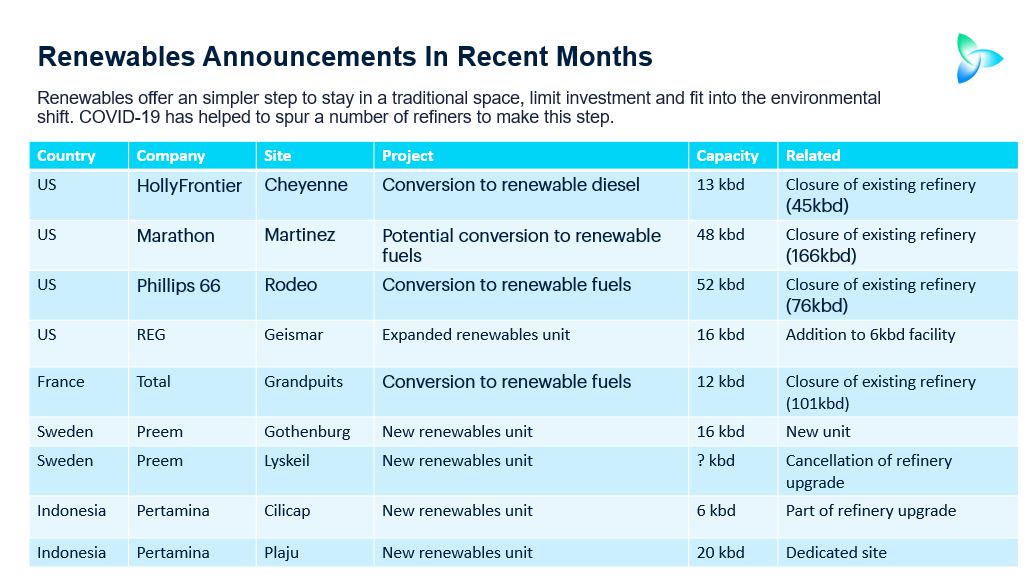 According to Connolly: “The scale of some of
these projects is impressive, with some such as
Marathon and Phillips in the US reaching around
50,000 bbl/day from 10-15,000 bbl/day/year
previously.

NOT REACHED ‘PEAK OIL’
According to ICIS forecasts the world has not
yet reached ‘Peak Oil‘ because the huge amount
of demand growth expected in Asia will outweigh
the impact of changes in the energy mix led by
environmental concerns.

However, since the pandemic hit, oil refiners
around the world have suffered a collapse in
demand for transport fuels.

ICIS estimates demand destruction averaged
around 13m bbl/day from January to the end of
June.

“There has been recovery since then but we
expect to see continuing challenges for
refiners,” said Connolly.

The loss of personal mobility in domestic and
international travel has cut just under 3m
bbl/day of global jet fuel consumption from a
7-7.5m bbl/day market. Gasoline consumption
fell by just over 3.3m bbl/day and diesel by
2.5m bbl/day but from a much bigger market, so
representing a smaller magnitude of change.

“There have been changes to working habits such
as home working plus stimulus packages focussed
on things like electric vehicles and the
hydrogen economy. We now forecast a faster
transition away from oil than we did
pre-pandemic,” said Connolly.

Throughout the crisis naphtha demand has stayed
within historic averages, according to ICIS
analysis. It is still below previous forecasts
for 2020 but nowhere near the shock collapse
seen in gasoline, jet fuel and diesel markets.

REFINERIES RECONFIGURED TO MAXIMISE
NAPHTHA
During the pandemic there have been cuts to
refinery runs to control inventories of
transport fuels. But reduced naphtha production
was partially offset by refineries adjusting to
increase the proportion of naphtha whilst
decreasing jet and other fuels.

“This is a big shift from previous numbers of
standalone plants which now only make up 30% of
new projects. We see 20% of plants directly
linked to natural gas liquid (NGL) feedstocks
such as ethane crackers, said Connolly.

“The scale of growth in petrochemicals in Asia
is amazing, driven especially by China and this
reflects where the demand growth will be,” he
added.