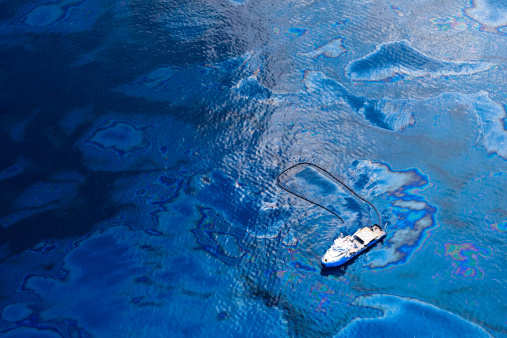 Chennai: Boarding the burning as well as intermittently exploding ‘MT New Diamond‘ – a very large oil tanker holding about 300,000 tonnes of crude – and connecting it to a tow to arrest its drift towards the Sri Lankan coast and positioning it into the wind was the turning point in saving the tanker as well as the marine environment, said the Indian Coast Guard.

The Coast Guard on Saturday recalled how the raging fire was put out on the very large crude carrier (VLCC) carrying 300,000 tonnes of Kuwaiti crude bound for Paradip port.

In the process it averted a serious disaster in the region which otherwise would have threatened the bio-diversified marine environment of Sri Lanka, Maldives and southern India.

“Compared with the recent oil-spill mishap of 1000 T Bunker Oil from MV Wakashio witnessed off Mauritius in August 2020 that led to declaration of ‘National Emergency’ by the island nation, the quantum of crude in this incident was 270 times more voluminous. It is left to the imagination that how devastating an oil spill of this high magnitude would have been for the region,” the Coast Guard said.

The oil tanker caught fire on September 3 after an explosion in its engine room, 37 nautical miles off the Sri Lankan coast.

The 20-year-old VLCC, sailing under the Panama flag, departed from Kuwait’s Mina Al Ahmadi on August 23 and was headed for India’s Paradip port in Odisha, which it was expected to reach on September 5

According to the Coast Guard, the vessel with 23 crew reported a major explosion in its engine room – boiler explosion – while it was on its way to the port in Odisha.

The ship apparently had about 1,700 tonnes of fuel when it caught fire.

The distress message was picked up by Maritime Rescue Coordination Centre (MRCC), Colombo as also by MRCC Mumbai.

The SACEP Sri Lanka, sought assistance of the Indian Coast Guard, as the threat of oil spill in the entire region was imminent, to conduct rescue and fire fighting operation on the ill-fated tanker, including pollution response operation, India being a signatory to the regional association mechanism.

Be that as it may, Coast Guard immediately diverted its multi-mission capable offshore patrol vessel ICGS Shaurya which was on preventive deployment off Tamil Nadu coast to the mishap site.

According to Coast Guard, Shaurya was also the first ship to arrive at the ‘Golden Hour’ and started fighting the fire on September 3 afternoon.

The night of September 3 witnessed one more blast onboard and Shaurya continued her efforts to keep the fire under control.

Meanwhile, 22 of the 23 crew were rescued by the joint efforts of MRCC of Coast Guard and the Sri Lankan Navy by alerting the nearest ships in the vicinity.

“The timely and daring firefighting efforts by ICGS Shaurya was the game changer and ensured that the fire remained contained within the bridge and accommodation area. If not, the fire would have spread to the cargo hold carrying huge volume of crude, resulting in explosions and consequent catastrophic environmental disaster,” Coast Guard said.

While the firefighting was on, a new threat emerged – the oil tanker started drifting towards the Sri Lankan shores due to the prevailing seasonal currents in area, posing an immediate threat of grounding and resultant oil spill near depths of 20 metres.

The burning oil tanker was pulled away from land and positioned favourably into the wind to prevent spread of fire to the forward section of the ship.

“This move was a crucial turning point of the operation that ensured safety of cargo of the oil tanker as also averting a major oil spill in the region,” Coast Guard said.

With intense and persistent firefighting efforts for three days by Coast Guard ships along with Sri Lankan ships and tugs, coming within 50 metres of a potentially huge explosive site, the fire was doused by September 6 morning.

Coast Guard ships however continued to monitor the situation, in case of re-eruption due to prevalent temperature and undertook surface-boundary cooling to reduce it around the cargo holds.

However, the evening saw a huge explosion on the starboard (right side) diesel oil tank and by midnight, huge flames reaching up to 60 metres high from the deck were seen at the rear part of the ship.

Once again, the firefighting efforts were scaled up by the four Coast Guard ships, two Sri Lankan and three salvage tugs.

The raging fire was doused on September 8 while boundary cooling with sea water was maintained to cut down the temperature of the oil tanker’s structure.

As a result of two major explosions of fuel oil tanks, the deck and hull on port and starboard side got ruptured resulting in oil water emulsion from the engine room into the sea and formation of minor oil sheen.

The next day Coast Guard’s Dornier aircraft stationed at Sri Lankan air base (Mattala) was launched in pollution response configuration for spray of Oil Spill Dispersant (OSD) to neutralise the sheen.

Simultaneously, Coast Guard ships also sprayed OSD and churned the waters for kinetic action and to accelerate the disintegration of the oil sheen.

On September 9, the salvage team boarded the ill-fated oil tanker and assessed no hotspots, flames/smoke with no breach of cargo tanks.

Naval architects in the salvage team confirmed that the ship’s stability remained within the safe zone.

Post declaration by the salvors that the casualty vessel is safe as also upon receipt of information from the Sri Lankan authorities through the High Commission of India in Sri Lanka, the Coast Guard units were withdrawn from the scene on September 10.

A satellite image of the FSO SAFER taken by Planet Labs on September 14, 2020. PLANET LABS The satellite...

HI Sutton Image used with permission The Red Sea forms a physical and geopolitical choke point on much of...

MOSCOW (AP) — A Russian oil tanker was hit by an explosion in the Sea of Azov and a...

MOSCOW (AP) — A Russian oil tanker experienced an explosion in the Sea of Azov and an operation to...

Apple is now the world’s most valuable publicly traded company