Russia looks set to cement its place as the dominant force in the wheat world.

In 20 years, Russia has gone from being reliant on wheat imports to accounting for a fifth of global sales, as its fertile soils generate bigger harvests at attractive prices. More than 100 nations from Egypt to the Philippines buy its grain, and Russia has sought to extend that list by adding markets where its wheat has been excluded because of rules over grain quality.

That ambition passed a milestone last week when major buyer Algeria gave Russia the green light to step up shipments there. That followed a similar move last year from Saudi Arabia, another country that Russia has struggled to break into. 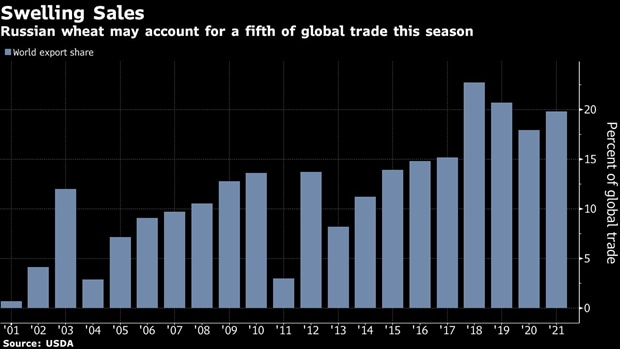 “You can see the staggering increase in both production and exports from Russia,” said James Bolesworth, a director at U.K.-based adviser CRM AgriCommodities. “Russia has invested heavily in order to increase market share and it’s still growing.”

Algeria’s state grains agency last week said it would start accepting wheat imports from all countries, including Russia, from its next tender. Until now, Russia has only been able to ship small amounts to the joint third-biggest buyer, which has required low levels of bug damage in cargoes.

While Russia’s agricultural agency said it hasn’t been informed of any changes yet, shippers have been invited to Algerian tenders and a French trader said the country may relax its bug rules. A trial shipment passed quality tests there earlier this year, although sales may take time to reach significant levels.

As well as starting sales to Saudi Arabia this year after the kingdom relaxed bug-damage rules, Russia increased wheat exports to countries from Turkey to Brazil and Vietnam to Tanzania in recent years. Helped by its second-largest harvest ever, Russia is expected to ship out 37.5 million tons this season and reclaim its ranking as the world’s top exporter.

Russia’s cheap supplies have seen it grab export-market share from the U.S. to European Union in the past decade, dominating sales to countries like Egypt, where it has won about 80% of tenders so far this season. More Russian sales to Algeria would be a blow to French shippers because the nation is their biggest customer, and France’s exports outside the EU are already forecast to halve this season.

Still, Russia could face more competition in the coming months from Canada and Australia, where harvests are increasing.

A QuickTake on How Oil Giant Russia Came to Dominate Wheat

Russian farmers have come a long way since Soviet-era collectives gave way to private ownership of rich soils. They’ve used rising incomes to invest in fertilizers and top-of-the-line equipment to further boost output, and expanded storage to give them more control over holding onto grain for better prices. 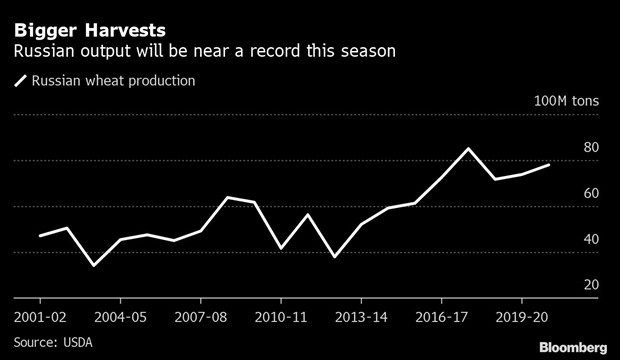 “Their crops are so good they open new markets year after year,” said Georgi Slavov, global head of fundamental research at London-based broker Marex Spectron. Russia’s low supply-chain costs have helped to grab more business from suppliers like the U.S., he said.

Business Standard has always strived hard to provide up-to-date information and commentary on developments that are of interest to you and have wider political and economic implications for the country and the world. Your encouragement and constant feedback on how to improve our offering have only made our resolve and commitment to these ideals stronger. Even during these difficult times arising out of Covid-19, we continue to remain committed to keeping you informed and updated with credible news, authoritative views and incisive commentary on topical issues of relevance.
We, however, have a request.

As we battle the economic impact of the pandemic, we need your support even more, so that we can continue to offer you more quality content. Our subscription model has seen an encouraging response from many of you, who have subscribed to our online content. More subscription to our online content can only help us achieve the goals of offering you even better and more relevant content. We believe in free, fair and credible journalism. Your support through more subscriptions can help us practise the journalism to which we are committed.

Foreign fighters were meant to leave Libya this week. A huge trench being dug by Russian-backed mercenaries indicates they plan to stay

Construction on an enormous trench across Libya, dug by Russian-backed mercenaries Wagner, is raising fears that foreign fighters will...

US Coronavirus: Hospitalizations in US reach an all-time high

AAA: Gas prices up across the nation, but not in Utah