The Nikkei Asian Review is tracking the spread of the new coronavirus that originated in the central Chinese city of Wuhan.

Global cases have reached 29,114,477, according to Johns Hopkins University in Baltimore.

To see how the disease has spread, view our virus tracker charts: 5:19 a.m. Carmakers PSA and Fiat Chrysler have revised the terms of their planned merger, reports Reuters, citing a source. PSA would hold onto parts maker Faurecia and FCA would cut the cash portion of a 5.5 billion euro ($6.5 billion) special dividend. “The aim of those changes is to reinforce the balance sheet structure of both companies after the COVID-19 crisis and ensure that the merger plan is concluded as soon as possible,” the source said.

5:02 a.m. The U.S. State Department has lowered a travel advisory for Americans headed to China or Hong Kong from “Do Not Travel” to “Reconsider Travel.” The warning cites the country’s COVID-19 outbreak and arbitrary enforcement of local laws.

3:30 a.m. Demand for gasoline and other liquid fuels never fully recovers from the fall caused by the coronavirus pandemic in two of three scenarios put forward in BP’s “Energy Outlook 2020,” implying that oil demand “peaked in 2019,” the oil major says.

3:10 a.m. A group of 15 scientists from five countries has sent a letter to the medical journal the Lancet explaining their doubts about the accuracy of preliminary data on Russia’s COVID-19 vaccine, Reuters reports.

The effectiveness of the so-called Sputnik V shot has become a matter of international debate. Among those who have expressed hope is Philippine President Rodrigo Duterte, who says his government will prioritize buying COVID-19 vaccines provided by Russia or China.

2:03 a.m. The United Arab Emirates issues emergency approval for the use of a coronavirus vaccine that is currently in phase three trials. Front-line workers would have priority in receiving the vaccine.

He adds that the nation of over 1.3 billion people has been able to limit its cases and deaths per million population to 3,328 and 5.5 respectively, saying it is “one of the lowest [rates] in the world.”

6:00 p.m. Nintendo is boosting output of the Switch game console by 20%, to 25 million units for the fiscal year through March 2021, as stay-at-home and other coronavirus restrictions have led to a surge in demand.

5:45 p.m. The Philippines reports a record daily increase in new coronavirus deaths for the second time in three days, adding 259 more fatalities to bring the total to 4,630. The country also records 4,699 newly confirmed cases, taking total infections there to 265,888, the highest in the region. Passengers line up to ride a bus in Quezon City, Metro Manila. The Philippines has reported a record number of virus-caused deaths for the second time in three days.

5:00 p.m. Tokyo Disney Resort plans to cut winter bonuses by 70% for its roughly 4,000 full-time and part-time employees, sources say. Some contract workers, such as dancers, who are currently without work, are being urged to transfer or retire to cut costs.

3:08 p.m. Cathay Pacific Airways will park more of its fleet in long-term storage outside Hong Kong after the territory’s COVID-19 resurgence dampened hopes for a recovery in air traffic. The airline said it will park about 40% of its planes, up from a third, and cap passenger operations at about 10% of normal capacity in September and October. It operated at 7.8% capacity in August, but still only filled a fifth of its seats.

2:10 p.m. Australia proposes incentives worth 2.3 billion Australian dollars ($1.67 billion) over 10 years to keep the country’s four remaining oil refineries open, saying it would invest in building fuel storage as part of a long-term fuel security plan. The country’s refiners have been battered by the coronavirus-driven collapse in fuel demand, racking up losses they say threaten the future of operations. 1:20 p.m. China reports 10 cases for Sunday, the same as a day earlier, all of which were imported. The country also reports 39 asymptomatic patients, compared with 70 a day earlier.

11:00 a.m. U.S. President Donald Trump holds an indoor campaign rally in the state of Nevada, despite public health officials’ warnings against large indoor gatherings during the pandemic. People were seated close together and many did not wear masks, Reuters reports.

10:35 a.m. South Korea confirms 109 cases, down from 121 a day ago, bringing the country total to 22,285 with 363 deaths. Authorities eased social distancing rules in greater Seoul for two weeks starting today, allowing cafes to serve indoors and lifting the night curfew on restaurants.

10:23 a.m. New Zealand will lift coronavirus restrictions across the country on Sept. 21 except in Auckland, its biggest city and the epicenter of a second wave of infections. Prime Minister Jacinda Ardern says Auckland’s restrictions would be reviewed next week.

8:00 a.m. Australia’s state of Victoria reports seven deaths and 35 cases in the last 24 hours, its lowest daily rises since late June. The state has eased some restrictions in its largest city Melbourne starting Monday, shortening the overnight curfew by an hour and doubling the amount of time people can spend outside to two hours per day.

5:33 a.m. The World Health Organization reported a record one-day increase in global cases on Sunday, with the total rising by 307,930 in 24 hours.

2:57 a.m. Israel will enter a three-week nationwide lockdown starting on Friday to halt the contagion after a second surge of cases, Prime Minister Benjamin Netanyahu said.

2:01 a.m. Saudi Arabia will partially lift its suspension of international flights as of Sept. 15 to allow “exceptional categories” of citizens and residents to travel. These include public and military sector employees, diplomats and their families, those working for public or non-profit private sector jobs abroad, businesspersons, people who need medical treatment abroad and those studying abroad.

6:36 p.m. India reports 94,372 cases, pushing the country total past 4.7 million, as infections rise in several states amid a gradual reopening of businesses. Total deaths rise to 78,586 with 1,114 new fatalities. 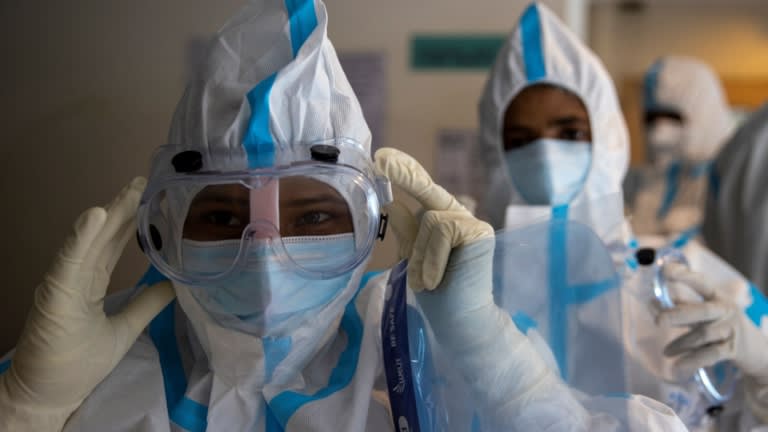 Medical workers wear personal protective equipment as they get ready to treat patients suffering from the coronavirus disease in New Delhi.

5:55 p.m. Police in the Australian state of Victoria arrested 74 people and fined 176 for breaching public health orders, as scattered protests against a weekslong lockdown continued for a second straight day across Melbourne. Victoria police said there were between 200 and 250 people involved in the protests but have yet to report any injuries.

5:11 p.m. Indonesia reports 3,636 cases and 73 deaths. The latest report brought the total number of infections to 218,382 and deaths to 8,723 — the highest number of fatalities in Southeast Asia. Jakarta will reimpose stricter restrictions starting on Monday to control the virus.

4:26 p.m. South Korea eases its tough social distancing policy for the next two weeks in Seoul, with daily infections hovering within triple digits. The government has lifted a ban on onsite dining after 9 p.m., but establishments must restrict seating and record patrons’ contact details. While leisure facilities such as gyms and internet cafes can also reopen, indoor gatherings are limited to 50 people and outdoor gatherings to 100, while spectators are banned from sporting events.

12:13 p.m. The Philippines deported a United States Marine on Sunday convicted of killing a transgender woman in the Southeast Asian country in 2014, after being granted a pardon by President Rodrigo Duterte. The pardon has sparked condemnation from activists, who described the move as a “mockery of justice.” Presidential spokesman Harry Roque, who served as a lawyer for the prosecution, had said Duterte’s decision may have stemmed from his desire to get access to coronavirus vaccines being developed by U.S. companies.

0:08 p.m. Lockdown restrictions in the Australian state of Victoria will ease slightly on Monday, as the number of daily cases continued to fall in the country’s hotspot. Announcing a 3 billion Australian dollar ($2.2 billion) aid package to businesses in Victoria, home to a quarter of Australia’s population, officials also said there were 41 infections and seven more deaths.

10:17 p.m. Pfizer and BioNTech SE propose to the U.S Food and Drug Administration to expand their Phase 3 vaccine trial to about 44,000 participants while increasing the diversity of the trial population. The initial target figure for the trial was up to 30,000 participants, which the companies say they expect to reach by next week. The proposed expansion would also allow the companies to enroll people as young as 16 and people with chronic, stable HIV, hepatitis C and hepatitis B, they added.

9:42 p.m. AstraZeneca restarts U.K. clinical trials of its vaccine, one of the most advanced in development, after getting the green light from safety watchdogs, the company says. The late-stage trials of the experimental vaccine, developed with researchers from the University of Oxford, were suspended after an illness in a study subject in Britain on Sept. 6, casting doubts on an early rollout.

5:38 p.m. Taiwan will sign up for the “COVAX” global vaccine allocation plan to ensure it will be able to access a vaccine when one becomes available, the health minister says. The self-ruled island is also researching its own vaccine. The World Health Organization and the GAVI vaccine alliance are leading the COVAX facility, aimed at helping buy and fairly distribute shots around the world.

SINGAPORE: China's exports of clean marine fuel in August hit a high for the year, customs data showed on...

With winter on the horizon, gas prices expected to fall.

Trade War Becomes Key Driver For Oil As Elections Near