US oil producer ConocoPhillips has begun to bring production back online after curtailments in the wake of the price crash pushed it to a $1bn loss in the second quarter.

The company — the US’s largest independent producer by market capitalisation — was one of the first to cut back on output as crude prices crashed earlier this year, shutting production across its operations in Canada and the US.

Conoco blamed the production cuts and weak prices for its heavy loss in the three months to June. But with oil prices having now bounced back, it is joining other producers in gradually turning the taps back on. It said it had already restored output in Alaska and expected to fully bring back production in the rest of the US by September.

“We are monitoring the market closely to develop a view around the timing and path of price recovery and to guide our corresponding actions,” said Ryan Lance, Conoco chief executive. “As the market strengthened late in the second quarter, we began reversing our second-quarter curtailments and ramping up production across the Lower 48, Alaska and Canada.”

The company reported a quarterly loss of $944m, excluding exceptional items. The figure compared with a $1.1bn profit in the same period last year and was worse than the $610m loss analysts had pencilled in. Total revenues of about $4bn were down by half on last year.

Shares fell more than 7 per cent in early trading on Thursday to about $37.

The grim results underlined the malaise in the sector, which has been ravaged by a collapse in prices triggered by a Saudi-Russia price war, which sent supply surging, and by the coronavirus pandemic, which slashed global demand by a third. 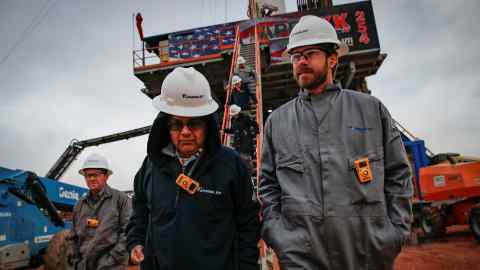 US oil prices plunged into negative territory for the first time ever in April. But they have now bounced back to about $40 a barrel.

American oil output collapsed at the peak of the crisis from more than 13m barrels a day to less than 10m b/d, but it has recovered to about 11m b/d, where analysts expect it to remain for the rest of the year.

On a visit to Texas, the most prolific US oil producing state, on Wednesday President Donald Trump heralded the recovery of activity in the industry. “We’re OK now. We’re back,” he said. But few now expect the country to return to its previous levels of production.

Conoco produced 981,000 barrels of oil equivalent a day in the second quarter, excluding Libyan production, after a cut of 225,000 barrels. That left it down by more than 300,000 boe/d compared to the same period last year.

Video: Coronavirus: why oil companies are scrambling to survive

The year 2020 brought a tectonic shift in oil markets. By early September, COVID-19 had infected over 27.3 million...

Venezuela Is Buying Iranian Oil With Planes Full Of Gold

Iran has received gold from Venezuela for the fuel cargoes Tehran had sent to the Latin American country, a...

Don’t Forget About Supply By all means and measures, last week’s government inventories report was bullish, but that didn’t...

The stability of the global oil market is under threat. The impact of COVID-19 and the resultant demand destruction...

Oil Prices May Recover Before 2021