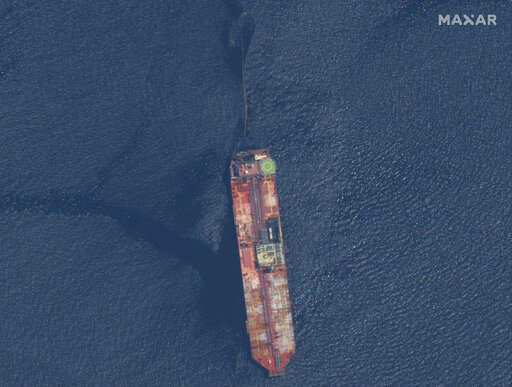 The Coast Guard also added that its specialist team and tug ALP Winger connected a tow at 7 p.m.

The 20-year old very large crude carrier (VLCC) vessel, sailing under the Panama flag and chartered by Indian Oil Corporation (IOC), was on fire since Thursday morning, about 37 nautical miles off the Sri Lankan coast and in the Sri Lankan Exclusive Economic Zone.

On Friday, the New Diamond’s Captain along with a Coast Guard officer and a sailor boarded the blazing oil tanker and assessed towing and anchoring facilities of the massive vessel that was still blazing.

“The towing and anchoring facilities are in good condition for those activities. Where the vessel would be towed will be decided by the Central government,” a Coast Guard official told IANS.

He also said the cargo pumping facility is also intact and the cargo area has not been affected.

According to him, the fire is on the vessel’s port side and there is not much heat on the deck. The fire in the crew accommodation area has been put out.

The Coast Guard was working on a multi-pronged strategy to prevent an oil spill from the massive vessel, which would be a huge environmental disaster if it occurs.

Two Coast Guard Dornier aircraft, with pollution response spray pods and oil spill dispersants, were being launched from Tuticorin to Mattalla as a preventive measure towards any oil spill contingency, the Coast Guard said.

The aircraft were to augment the Coast Guard and Sri Lankan Navy ships engaged in dousing the blaze. Coast Guard ship Sarang had also reached the spot and joined the fire fighting operations.

According to the Coast Guard, its ships Sarang and Sujay with Pollution Response Equipment and a Chetak helicopter had been pressed into service.

The Coast Guard’s Pollution Response Teams and vessels were on standby with embarkation plan of equipment at short notice.

The Coast Guard also said a two-metre crack has been observed near the port aft portion of New Diamond, 10 metres above the waterline.

“If the crack propagates, and there is every likelihood of that but cannot be predicted, then the ship’s stability could be affected. A ship at a standstill is still subjected to tremendous stresses and could break and capsize,” M. Kalayanaraman, Technical Editor, Riviera Maritime Media, told IANS.

Kalyanaraman also said if the fire is still raging, it means availability of fuel for the blaze, which could be bunker oil.

A Coast Guard official, however, told IANS that the crack has not grown further.

Owing to the concerted joint action by the Coast Guard ships and the Lankan Navy, 22 crew from the oil tanker have been rescued while a search for a missing Filipino crew member is on.

As per www.marinetraffic.com, the New Diamond oil tanker departed from Mina Al Ahmadi on August 23 and was headed to India’s Paradip port.

The oil tanker was expected to reach Paradip in Odisha on September 5 where the IOC has a large refinery.

The Coast Guard said the Sri Lankan Navy had sought assistance to fight the fire and the explosion on board the New Diamond.

According to reports, another oil products tanker Helen M, sailing under the Panama flag, had reached the location of New Diamond for rescue after receiving a distress message. Helen M was sailing from Mangaluru to Kakinada in Andhra Pradesh.

Meanwhile, officials of IOC remained silent and were not available for comment.

CAIRO - The top U.N. official for Libya said Saturday that an advisory committee for representatives of Libya's different...