SINGAPORE (ICIS)–Global crude and
Asia’s petrochemical markets are relatively
calm despite massive shutdowns of refineries in
the US Gulf Coast currently being pounded by
Hurricane Laura, which made a landfall on Thursday
afternoon in southwest Louisiana.

Concerns about global demand being dampened by
continued spikes in coronavirus infections
weighed across markets.

Crude prices remained close to their
highest levels since early March this year with
producers in the Gulf of Mexico having shut-in
84% of the region’s total output – equivalent
to 1.56m bbl/day – and evacuated over 300
offshore facilities.

“Although Hurricane Laura is incoming very
fiercely, the market thinks its impact will be
very short-lived as oil producers in the region
are just temporarily pausing their operations
for a few days,” said Li Li, head of ICIS crude
and distillates analytics.

For ethylene, the hurricane will result in at
least several days of delay in the shipment of
cargoes from Houston to northeast Asia.

Around 40,000 tonnes of US supply are slated to
load between the second half of August and
early September.

A buyer is considering booking regional spot
supply amid concerns over possible lengthy
delays in the delivery of its deep-sea cargoes
for second-half September and first-half
October delivery.

US-TO-ASIA ARBITRAGE WINDOW CLOSED FOR
SOME
For petrochemical feedstock naphtha, the expected
strength in Western markets could mean less
arbitrage supply flows to Asia as a result of
the hurricanes hitting the US Gulf Coast.

Arbitrage flows from the US to Asia is deemed
unviable on paper at least, according to market
participants.

Naphtha prices in Asia gathered some ground
this week, buoyed by spot demand for October
supplies, which helped lift the product’s
refining margin to a one-month high of above
$70/tonne.

Demand, however, is not substantially robust,
with limited bullish factors in the market for
now.

Spot naphtha cargoes for October shipments in
the form of purchases from South Korea fetched
small discounts to spot CFR (cost and freight)
Japan quotes compared with premiums achieved in
the previous months.

In the styrene monomer (SM) market, the
arbitrage window for US styrene cargoes into
Asia may remain closed, with a price spread of
less than $50/tonne between US FOB Gulf and CFR
Asia markets in the week ended 28 August.

Selling pressure is limited as some units in
the US such as
Styrolution have shut down to prepare for
Hurricane Laura.

Most spot FOB US Gulf cargoes for end-August
and early September-loading have already been
sold earlier.

Market participants are not ruling out the
possibility of some short-covering by some
northeast Asian participants for October
arrivals should logistics in the US take a
longer-than-expected time to recover.

At least 25,000 tonnes of deep-sea SM material
for October arrival have already been sold into
Asia earlier.

Asia’s paraxylene (PX) market is likewise
unaffected, as the region has been
self-sufficient following start-ups of new
facilities since 2019.

There were some concerns that a resulting
reduction in US refinery rates in the US would
trigger a crude sell-off and exert a downward
pressure on PX prices in Asia. 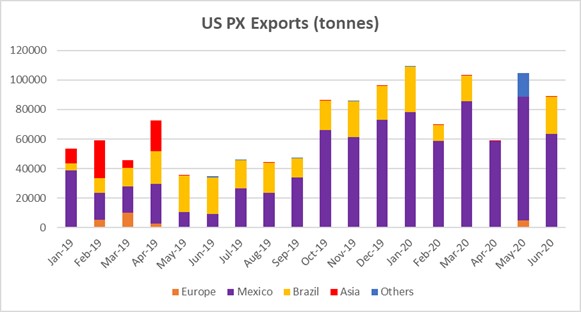 In the mixed xylenes (MX) market, the arbitrage
window from the US is also closed, with the
spread between FOB US Gulf and FOB South Korea
prices at less than $50/tonne.

There is still a sizable motor gasoline supply
length reflected in the inventory despite the
US refinery shutdowns.

As MX is mainly used in gasoline blending,
physical demand for octane booster is likely to
stay weak.

EYES OUT FOR OTHER
MARKETS
In the methyl tertiary butyl ether (MTBE)
market, bids have been rising for four straight
sessions, with Asian players eyeing arbitrage
opportunities to ship out cargoes to Latin
America amid plant shutdowns in the US.

Mexico and Chile – main export destinations for
US MTBE – might experience shortage of supply,
which Asia could provide.

Supplies coming from the US will naturally be
halted amid the US shutdowns but the overall
impact on the Asian markets are not expected to
be significant.

In the case of methanol, supply to South Korea
could be affected as the country is the US’
biggest export destination.

In terms of prices, however, Asian markets have
not been tracking the strong US market for some
time now.

For polyvinyl chloide (PVC), spot supply from
the US has already been snug since Formosa
Plastics USA declared a force majeure in
mid-August at its Point Comfort and Baton Rouge
units.

For acetone, discussions for Asia-origin
acetone to US came to a standstill this week as
US-based importers requested more time to work
out their inventory requirements.

Sellers in Asia are directing their attention
to other deep-sea markets such as Europe and
South America, for the time being.

So far in August, more than 6,000 tonnes of
Asia-origin spot acetone have been sold to the
US.

In the phenol market, discussions for US-origin
cargoes were limited prior to the hurricanes.

As US cargoes are subject to anti-dumping
duties in both China and
India, recent offers were met with limited
interest among importers in the bonded market.

For Taiwan-based importers, their inventory
requirements had been met from earlier
purchases and are currently not active in the
market.

In the synthetic rubber market, the US
shutdowns are expected to have limited impact
since Asian spot supply is curtailed due to
scheduled plant turnarounds in September amid
firm regional demand.

Among major Asian SBR makers, South Korea’s
Kumho is shutting its 270,000 tonne/year SBR
plant in Ulsan for turnaround in September.

LG Chem has been running at reduced rates since
early July and will shut down one 80,000
tonne/year SBR line in Daesan permanently in
September for commercial reasons.

In the acrylonitrile (ACN) market, supply from
INEOS Nitrile in the US under contract volumes
has not been affected so far

For monoethylene glycol (MEG) market, exports
from the US will come off from highs in the
first half.

“Not much impact from the hurricane, only
shipment a bit delayed,” a northeast Asian
producer with its unit in the US said.

In the first half of 2020, US cargoes which
were supposed to be exported to Europe, had
nowhere to go but China amid the dwindled
demand in Europe.

From January to June, China imported 336,133
tonnes, nearly four times of the volume for the
whole of 2019.

In the vinyl acetate monomer (VAM) market,
Asian supply could be diverted to Europe, where
demand is stronger, amid the US shutdowns.

“My Europe-based customer asked me to reserve
3,000 tonnes even though the earliest arrival
schedule is October,” said a major VAM
producer, suggesting supply concerns preceding
the impact of Hurricane Laura on US supplies.

But the effects of reduced consumer purchasing
power and rising unemployment rates as the
coronavirus pandemic continued to ravage
economies in southeast Asia put a drag on
producers’ earlier push to recover margins for
August shipments.

“We [will] have to watch the hurricane impact
next week,” a southeast Asia-based distributor
said, deeming the impact in Asia to be minimal
if the duration of plant outages is less than a
month.

The approach of Hurricane Laura has prompted a

Companies have evacuated 299 production
platforms, or 46.5% of the 643 manned platforms
in the Gulf of Mexico.

Follow this Topic
Page to stay up to date with the latest
insights and breaking-news updates on the
impact from Hurricane Laura on the chemicals
markets.

California ban on fracking by 2024 criticized as too late Raleigh News & Observer www.newsobserver.com

CLOSE If you're thinking of buying an all-electric or hybrid car, here are a few things to consider. Americans...

The latest Cannabis Oil market report estimates the opportunities and current market scenario, providing insights and updates about the corresponding...

Which Supermajors’ portfolios are most resilient?

Who retains the most value at lower prices, and who is the most sensitive to change? We’ve examined how...

India should ignore Putin’s offer to broker accord with China

OPEC Output Surged Most in 30 Years in April  | Rigzone