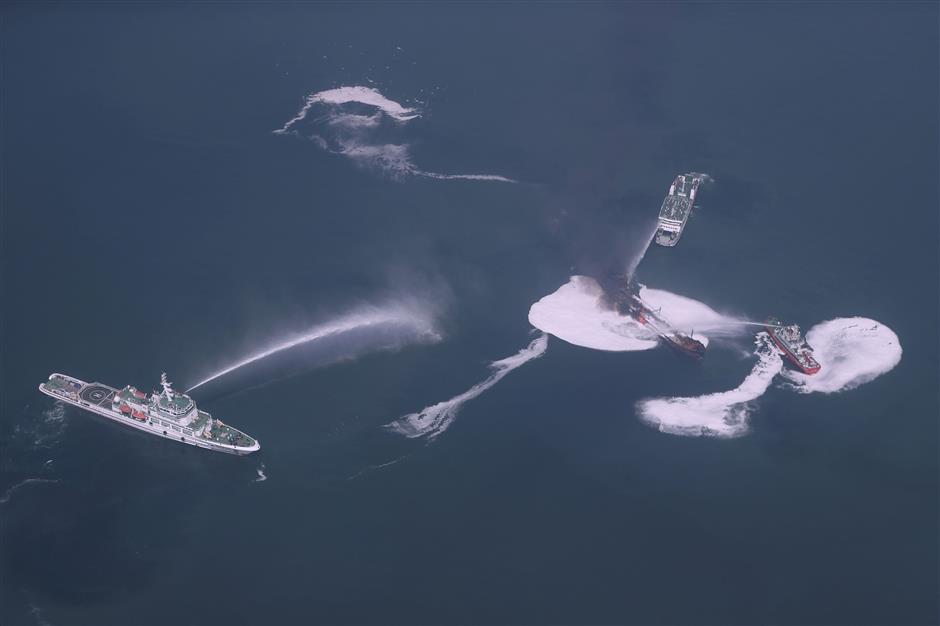 The remains of eight victims were found on Saturday morning aboard an oil tanker that collided with a gravel ship on the Yangtze River two days ago.

After the collision, the oil tanker’s deck caught fire and the gravel ship sank.

According to the Shanghai Maritime Search and Rescue Center, a search team boarded the tanker and found the eight remains at 6:15am.

Search teams have been active since Thursday. A fire caused by the collision was put out completely around Friday noon through measures including spraying sea water and foam saturation.

Of the 17 crew, three have been rescued, eight remains have been found while six are missing. Fifteen ships, rescue helicopters and aircraft are continuing the search.

According to monitoring by the ecology and environment departments, the accident has had no obvious impact on the air quality and marine environment of  coastal land so far.

Japan And The UN Shipping Agency’s Attitude To Climate Change

California on fire: a hillside burns during the Bobcat Fire in Juniper Hills, California, September ... 18, 2020....

Off the North Carolina shore, a deep dive into history

On the one hand I do. I have an advanced open-water scuba certification from the Professional Association of Diving...

In Peru, self-reporting of oil spills by companies leaves an unknown toll

In Peru, the oil industry is responsible for monitoring its own spills, but companies have been penalized for providing...

While Waterworld doesn’t even explicitly mention global warming, Merchant says it would have undoubtedly made viewers inquire about the...

A small fleet of Indian and Sri Lankan Naval and Coastguard vessels are husbanding the stricken Supertanker MT New...

The Tale Of Two Iranian Navies