UN: Tanker held hostage off Yemen, with 1 million barrels of crude, may explode

Internal documents obtained by The Associated Press show that seawater has entered the engine compartment of the tanker, which has not been maintained for over five years, causing damage to the pipelines and increasing the risk of sinking. Rust has covered parts of the tanker and the inert gas that prevents the tanks from gathering inflammable gases has leaked out. Experts say repairs are no longer possible because the damage to the ship is irreversible.

For years, the UN has been trying to send inspectors to assess the damage aboard the vessel known as the FSO Safer, and looking for ways to secure the tanker by unloading the oil and pulling the ship to safety.

But a European diplomat, a Yemeni government official, and the tanker’s company owner said that Houthi rebels have resisted. The diplomat said the rebels are treating the vessel as a “deterrent like having a nuclear weapon.” All three individuals discussed the subject with a reporter, on condition of anonymity.

“They do say that openly to the UN, ‘We like to have this as something to hold against the international community if attacked,’” the diplomat said. “Houthis are definitely responsible for failure of the UN to look at the ship.”

Money is also an issue, the diplomat said, adding that the Houthis initially were demanding millions of dollars in return for the oil stored in the tanker. The UN is trying to reach an arrangement where money could be used to pay workers and employees at the Red Sea ports where the ship is moored, the diplomat added.

Some experts, however, criticize both the Houthis and the UN for failing to fully understand the magnitude of the crisis with the abandoned ship.

Ian Ralby, founder of I.R. Consilium, who specializes in maritime and resource security, told the AP that the UN’s efforts to send a team to assess the ship are “futile.” What the vessel needs is a salvage team, he said

“It’s a real shame that they wasted so much money and time in this futile operation,” said Ralby. “If you are taking these years to get a simple team to assess, we will not have a second chance to salvage,” he added. 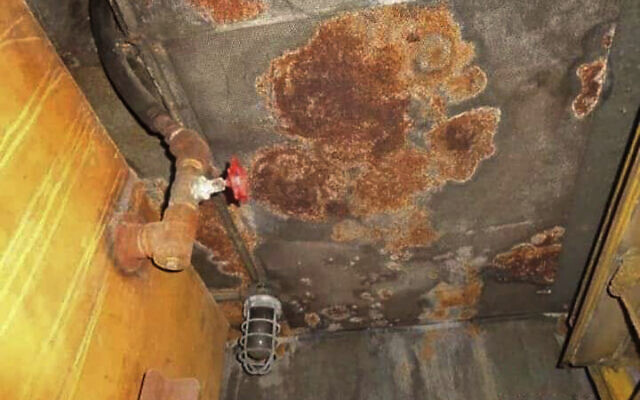 The internal decay inside the FSO Safer and the lack of a functioning cathodic protection system, moored off Ras Issa port, Yemen, in 2019. (I.R. Consilium via AP)

Ralby, who has written extensively about the tanker, told the AP that amid declining oil prices the cost spent on cleaning up the environmental damage from an explosion or leakage will be much more than the millions worth of oil on the ship.

But the Houthis have refused to back down from their demands.

Mohammed Ali al-Houthi, the rebel leader, blamed the US and Saudis for not letting the rebels sell the oil, saying in a June 18 Twitter post that any “disastrous consequences … God forbid,” that could result from the collapse of the vessel, will be the responsibility of these two countries.

Houthi rebels are in control of the western Red Sea ports, including Ras Issa, 6 kilometers (3.7 miles) from where the FSO Safer tanker has been moored since 1980s. They are at war with the internationally recognized government in exile, which is backed by a Saudi-led coalition and the United States.

The floating tanker is a Japanese-made vessel built in the 1970s and sold to the Yemeni government in 1980s to store for export up to 3 million barrels pumped from oil fields in Marib, a province in eastern Yemen. The ship is 360 meters (1,181 feet) long, with 34 storage tanks. 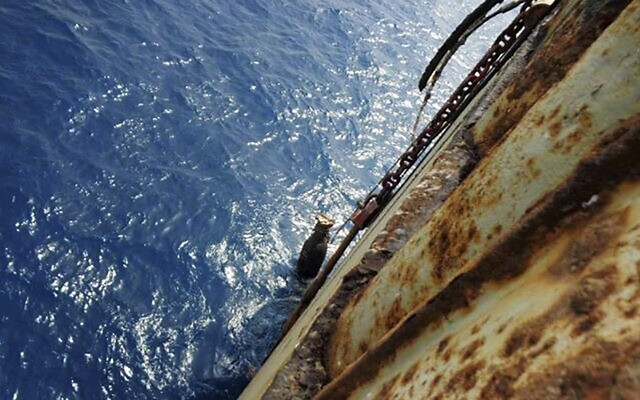 Deterioration is seen on the FSO Safer, moored off Ras Issa port, Yemen, in 2019. (I.R. Consilium via AP)

A senior official at the state-owned company in charge of the tanker said that because of a shrinking operational budget, which used to be around 20 million dollars a year before the war, the company could no longer afford to purchase a special fuel needed to run the boilers on the ship. The boilers are needed to power generators that, among other things, keep an inert gas that prevents explosions flowing. The tanker needs 11,000 tons of the fuel, which cost about 8 million dollars each year.

“After the stoppage of the boilers, the strong majority of the equipment and the machines of the tanker stopped because they all depend on steam power,” the company official said. That includes the machines that power the ventilation system, which reduces humidity and prevents corrosion, he said.

Since 2015, annual maintenance on the ship has come to a complete halt and most crew members, except for 10 people, were pulled off the vessel after the Saudi-led coalition imposed a land, sea, and air embargo before waging an extensive air campaign to dislodge the Houthi rebels from areas they seized including the capital Sanaa.

The UN has repeatedly warned that delays in taking action to fix the FSO Safer could lead to a man-made environmental disaster in the Red Sea four times greater than the 1989 Exxon Valdez oil spill.

The senior official at the state-owned company in charge of the tanker said that a similar oil spill off the coast of Yemen could accelerate the country’s worsening humanitarian disaster.

“The disaster could happen at any second,” he said, “Rescue Yemen from a terrible, imminent disaster that will add to Yemen’s burdens for tens of years and deprive thousands from their source of living and kill marine life in the Red Sea.”

UNITED NATIONS, July 13 (Xinhua) -- The United Nations is preparing a team to assess a neglected tanker off...

LONDON/WASHINGTON - Several companies that certify vessels are seaworthy and ship insurers have withdrawn services to tankers involved in...

Houthi rebels, who control most of western Yemen, say they will allow the United Nations to send technicians to...

UN encouraged experts may get to visit oil tanker off Yemen

But U.N. spokesman Stephane Dujarric said "the local authorities recently signaled they would approve a U.N. mission to the...

What’s Next for Global Oil Prices?: The Industry May Shut Down – Bloomberg